Fuel had been a concern from Day 1.

By all accounts, the distance between gas stations—or any other forms of permanent civilization as one traveled North of the 55th parallel—was significant. There was a map from the visitors centre that listed fuel sources along the Alaskan Highway; but it was unreliable by most accounts given constantly changing conditions. You could ride for a couple of hundred kilometers on a promise of a gas station at the end only to find it abandoned or closed, a sheet of plywood with “NO GAS” spray painted across it because the tanks had been emptied before the fuel truck had arrived to refill them.

I needed to be ready in case Gunther’s gas tank, which holds a meager* 22L, ran out.

My first thought was that I could always call up CAA and ask them to send out a few liters. I mean, I wasn’t riding The Road of Bones, after all. This was viable while I was still South and/or in the vicinity of The Trans Canada Highway. However, in the Northern latitudes where I would be riding, cellular towers were few and far between. Unless I had a satellite phone (which I didn’t due to the exorbitant cost), I would have no way of calling them. Even if I could get a few bars on a phone, I might be eaten by bears while waiting for someone to arrive. I had to accept the fact that I would be on my own.

The next best thing, then, was redundancy. I would need to carry extra fuel to mitigate the risk of shutting down for want of the stuff.

A jerry can then, right? Erm, no–mainly since there was no way to tie one down securely: It couldn’t sit on the top box that was behind the seat as the top box was convex and made of Polyethylene, making it slippery; it might as well have been secured to a curved sheet of ice. The top of the side bags were also out for the same reason. It couldn’t go under my tent and sleeping bag, which were tied down to the back of my seat, as doing so prevented securing these items evenly against the seat; and the last thing I needed was for my shelter and/or bed to blow off onto the highway.

No, I would need something more compact. My initial strategy, then,was to pack two, 1-liter, stainless steel water bottles filled with 94-octane. Not quite up to safety standards; but the price was right—they were a gift from my ever-helpful friend Edward—and didn’t leak. Mostly. In fact, despite sealing each canister in a zip-lock bag, my clothes, with which they were packed to keep them from bouncing around, somehow always smelled vaguely like a gas pump; and, on the occasions when I stayed in hotels, I half expected to be summoned to the front desk to discuss reports from the cleaning staff of petroleum fumes emanating from my luggage.

While my extra two liters of fuel did inspire confidence, the reality was they probably wouldn’t help much: Two liters would take me 30-40 kilometers—hardly likely to make any sort of difference unless there were a gas station just up the road. I needed something that would carry me a bit further. So, after mulling this over during the part of my journey that carried me across The Prairies, I bit the bullet and found myself emerging from a Canadian Tire in Calgary carrying a dull red, 5-liter jerry can.

I strapped the jerry can on top of the tent and sleeping bag with two bungee cords, criss-crossed through the handle. This meant five kilos of loose weight up high and behind me, increasing the risk of handling issues should that weight shift suddenly. The fuel jug did, in fact, flop from side to side until it nestled itself down into my sleeping bag; and, under heavy braking, it would occasionally flip forward and thump me on the back. For the most part, though, I adapted; and the angst it caused was outweighed by the confidence it instilled: No fuel? No problem; I brought my own.

In spite of my two liters of redundancy plus the additional five I now had, I wasn’t reckless; and erred on the side of caution. Particularly as I rode further North, I performed a mental calculation every now and then as to how far my current fuel situation could hold out. Oh, there were a few close calls, like Highway 40 between Hinton and Grande Praire in Northern Alberta — rolled into GP on fumes that time (but the ride was worth it — here’s a video). But nothing that caused the engine to stall. “Top it off” became my mantra; and I stopped at every gas station I came across whether I was running low or not.

Of course, the fact that I never had occasion to use any of the spare fuel I was carrying did cause some mixed emotion. I mean, the whole point of carrying extra fuel is to mitigate running out of the stuff; and while, on the one hand, I rode comfortably with the knowledge of my surplus, on the other hand, I was a bit disappointed that I was carrying something I never got to use.

*It’s funny how perspectives change over time. Back in the days of road trips with Suzi and Wanda, I was somehow able to get by with fuel capacities of 14L and 16L! 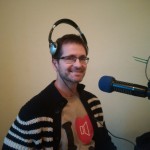 Andrew on the CIUT airwaves

page. What a hoot! Lots of eclectic vinyl from the past.