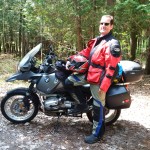 Adventure Bike Riding has been wired into my core for as long as I can remember.
I got my first bike when I was four. It was a royal blue, pedal-powered number with streamers hanging off the ends of the handlebars and a hockey card clipped to the frame so that the spokes‎ would flick it as they passed, making a “tick-a-tick-a-tick-a” sound. It is on this little blue bicycle that, so I am told, I came flying down a paved pathway at top speed toward a “T” intersection in the park one day; and used the bike’s training wheels for a controlled drift around the corner much to the shock of onlookers. My dad took the training wheels off after that.
My first encounter with a motorized cycle was at the age of eight. The kids next door had a mini bike and a large, paved lot in which to ride. It had a 50cc engine, no clutch and, as I recall, three gears. A few circuits was all it took–I was hooked.
Somewhere around age 11, I began waking up early on Saturday mornings, before anyone else in the house was awake; and riding the deserted streets and dew-soaked fields around the small town where I lived. Bathed in the silent, orange-yellow rays of dawn, the world was new and unspoilt and it belonged to me and my bike–by now, a magenta-coloured five-speed number with a banana seat and sissy bar (what can I tell you; it was the 70s). 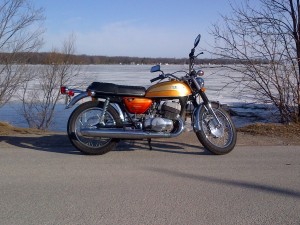 When I was 15, my dad, who was a bit of a gear head and owned sports cars of varying degrees, bought a motorcycle — a 1974 Suzuki T500 — from a friend. Sometimes, he had to go to his office to work on weekends; and he would take me with him, riding pillion, and let me ride his bike around the parking lot until he was finished working. Thus began an on-again / off-again 35-year love affair with Suzi (a.k.a. Queen Bitch) for, as soon as I was able to get my license, she was my ride.

Whereas most of my high school mates were borrowing the keys‎ to their parents’ cars, I was after the keys to the T500. I didn’t need four wheels — the smoke and smell of burning two-stoke oil; and the magical sound the engine made when its pitch morphed from a throaty burble at a stoplight to screaming banshee down the road was all I needed.
At 16, I went backpacking through Europe for the first time: London to Salzburg and back home via Amsterdam. In a city square in  Bonn, I saw this guy walking around in a half-undone full-leather riding suit (the weather was warm that day), his bike parked prominently off to one side; and I remember thinking, that’s freedom. While I was there, I bought my first riding boots–Italian leather with reinforcement across the tops of the toes to prevent wear from shifting; damned sight better than anything you’ll find today. I’ve still got ’em; and wear them riding when it’s dry (they weren’t designed for rain).
After ‎high school, some of the gang attended Queens University; and that meant road trips to Kingston for weekends filled with debauchery — usually with my good friend Edward riding pillion. Once, after polishing Suzi for hours and then driving to Brian’s (another mate from school) rented, off-campus house , it started to rain. Of course, rain on a just-polished motorcycle is not an option; and I did the most sensible thing I could think of: I rode Suzi up the front steps, across the verandah, through the front door and into the living room where she spent the night, warm and dry, while we caroused. Unfortunately, and unbeknownst to me, she was leaking oil at the time; and left her mark on the carpet. Sorry, mate.

At 21‎, I left home — and Suzi — behind, opting for a place of my own. This meant getting a bike of my own; and it just 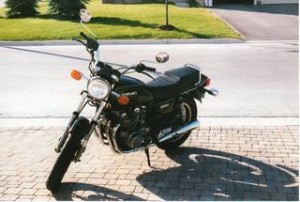 so happened that someone knew a guy who was selling his ’82 Suzuki GS650G so he could upgrade to the 1000cc model. One look and I was smitten.  After a couple of tire kicks and a handshake (and a loan from my step-mom — Thanks, Mom!) the deal was done; and Wicked Wanda became my ride.

Wanda and I went everywhere together: To parties; to The Black Bull down on Queen Street; to work; on midnight cruises along the waterfront. She became an extension of me‎–both in a physical and metaphysical sense.
Road trips were a staple by now. Since Wanda used a shaft drive instead of a chain to make the rear wheel go around, she was smoooooth on the open road; and didn’t require as much maintenance. Early one spring, on a sunny Saturday afternoon,  Brian  called to invite me up for visit at his farm outside of town (now, there’s a mate if ever there were one–especially after the incident with the carpet!). Within minutes of hanging up the phone, Wanda was idling impatiently, ready to go. A couple of hours later, I was riding up the lane way to the farm. The weather was a balmy 18 or so degrees; and we had a relaxing afternoon laughing about the old days while hiking around the back 40. Next morning, though, when I awoke, I had a hell of a surprise: Mother nature, fickle lady she can be, had decided to change things up; and replace the warm, sunny skies of the previous day with a foot of snow and temperatures hovering around zero. On another day, and with warmer gloves, and warmer boots, and a few extra layers of clothing, I might have braved the elements and ventured back down to the city. But this wasn’t that day; and I parked the bike in a shed until a couple of weeks later when there was another break in the weather.
It was sometime during this era that I had the dream that spawned the journey that is the focus of this site.
The road trips began to get further away from home base: Quebec… New Brunswick… New England… Boston… There never seemed to be enough time‎, though; and there was always a mad, flat-out, caffeine-fueled rush to get back home in time to show up for work on Monday morning. Everything takes longer on a bike. I am not sure why this is. One time, during a weekend blast down to Boston with Andrew riding pillion, we were a bit over optimistic when calculating the time it would take to get home; and departed early afternoon only to find ourselves screaming along the cold, dark, deserted freeway back to the Canadian border at 3 a.m. in an exhausting attempt to get home before sunrise. Suddenly, my passenger was frantically trying to get my attention to pull over. When I finally brought Wanda to a halt, on the shoulder, I realized half our gear had blown off the back of the bike. After brief discussion, it was decided that, given half our gear was still remaining, and the chances of recovering the missing flotsam from the pitch-dark freeway behind were remote, it would be best to carry on–which we did, arriving home around 6 a.m., leaving just enough time to get cleaned up and change into some work clothes.
The riding years between then and now have blurred a bit–mainly because the focus has shifted to sensible priorities like getting married, supporting a family, building a career, buying a house… you get the idea. Not that I have any regrets. It’s been (and continues to be) a wild ride–just on a different road with different people. And, while bikes have not been centre stage lately, they have always been there in the wings. I still wake up before everyone else on Saturday mornings in the spring, summer and fall; and blast through the roads north of the city at dawn. Suzi and I were reacquainted some years back after my dad had past his bike phase; and left her to rot in his back garden. It was from there that I rescued her, and embarked on a 15-year mission to resurrect her. Last summer, I took her on a mini road trip to Peterborough–first since the Queens road trips of seemingly ancient times. It felt great to be back in the saddle again. Back home. I suppose that was one of the triggers for this journey. 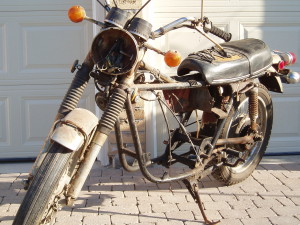 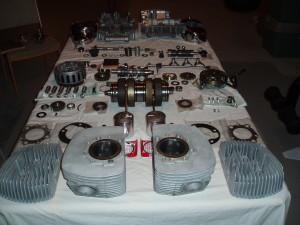 Suzi’s power plant during the rebuild