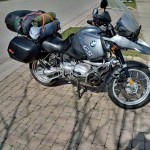 Ready for the road

I felt a bit like a squirrel this past weekend: Lots of scurrying around to collect bits and pieces from every corner of the house (and every corner of the local Canadian Tire); and hoarding them in a pile for packing. Then, with the help of a very wise subject matter expert, I did a trial pack to see where everything will fit. At this point, it seems I’ll have oodles of space — the top box, in particular, is a lot roomier than it looks. Of course, apart from checking how the sleeping bag, tent, etc. fit on the back seat, we didn’t actually pack much; just talked about the best places to stow everything. Looks great on paper! I’ve posted some photos in Sight / Sound.

While you’re at the Sight / Sound page, check out the new video I have posted. I have received a lot of questions about the bike; so I’ve added a 30-second clip of how Gunther sounds at start up. This was also a test of technology to check whether I could capture / edit video on my BlackBerry and post it to this site — unbelievably easy! <plug> The new BlackBerry Classic is awesome! </plug>

Next up was the Feats of Strength (anybody remember the “Festivus” Seinfeld episode?): Lifting my bike. While I have never dropped Gunther, and don’t plan to, there’s the “what if” factor. As you’ll note from the Bike page, the bike weighs 256kg dry (~275 in it’s current state, full of fuel, oil, and other fluids). Now, it’s extremely well-balanced when upright; a gentle tilt to one side or the other, though, and you can feel there’s some serious weight there. What if the bike goes down while I’m on my trip — not necessarily at high speed; but, say at low speed in soft gravel or if it gets knocked over in a parking lot by the clumsy or unscrupulous? Can I pick it up on my own? It was time to find out: With the help of my expert assistant, we gently laid Gunther on his left side. Facing the bike, I grabbed the handlebar with both hands and pulled up (yes, I bent my knees). When I got it to about 20% to horizontal, I could feel my vertebrae compressing; and didn’t want to risk lifting any further. This, incidentally, is the wrong way to lift a heavy bike (I was just feeling macho — a.k.a. being a dumb-ass.). Next, I tried the correct method of facing away from the bike, grabbing the frame and then walking backward while lifting. It was a struggle; but I was able to get it high enough to get out the kickstand and rest it there. After that, we tried laying it down on the right side. This time, I needed a bit of help (mind you, the bike was on a bit of an incline and I was lifting up-hill). Conclusion: If I do need to lift the bike, and I’ve eaten my Wheaties that morning, I’ll likely be able to right it on my own with effort. That would be Plan B, though. Plan A is to swallow my pride and seek the kindness of strangers. Psssshhhhh — yeah, right; who am I trying to kid; asking for help to lift your bike is like asking for a half pint of Guinness; you just don’t do it. At least I now have an appreciation for how (really really) heavy Gunther is.

Now, onto the first test run: I’ll be heading up to Craigleith Provincial Park this weekend to see how the bike handles on the road while fully-loaded, test out the camp stove, get accustomed to sleeping on the ground, etc. If you’re in the neighborhood, ping me and I’ll put an extra cup of water in the soup. If, on the other hand, you would prefer to participate vicariously (and I wouldn’t blame you given the forecast calls for a low of 6 at night), I will have my Spot Tracker turned on*; and you can follow my tracks as I head up North(ish) and putter around the campsite. This will be the first real test of… well everything before taking the show on the road. Be sure to check back for reports on how things turn out.

*Until I turn it on, you’ll get an error pop-up indicating there are no messages to display

Tent’s too small; but the boots are perfect!
Test Run #2: No Rain; Lots of Mosquitoes!