Swan Lake Provincial Park, BC — just South of Grand Prairie
6,872 km
When I left Jasper, something changed. I am not sure what, exactly; but the road had aa different feeling — more natural; more real; less structure; less steel.
Just before Hinton, I made a left turn and headed up highway 40 because it had the most squiggly lines on the map. Once on it, I realized why it was drawn in a black line instead of a red one like most of the other roads I’d been on so far: It was a secondary road — which meant it was not maintained to the same degree as the red roads. And, by “maintained” they mean cracks are filled with pitch sometimes; potholes are filled with gravel or soft, grainy asphalt sometimes; and long, bulging, heaves that form a twisting apex in the part of the lane where tires roll are usually left alone.
No matter, this road delivered on its promise of squiggles; and soon I was climbing, descending, leaning hard left, then flipping over for a hard right — often all together in the space of a kilometer. And the road surface? Why, that was the perfect warm up for The Alaska Highway.
Somewhere near the end of Hwy 40, there was a long, straight stretch on which a road crew was doing construction. When this happens, they close one of the road’s two lanes; and traffic in each direction takes turns using the side that’s open, guided by a pilot car (a pick-up actually) for around 10 km. Usually, the side that’s open is, in fact, being worked on as well; just in a more usable state.
In this case, the open side was covered in slick, black pitch. Not just pitch where the cracks were; no, the entire lane was covered in it. Of course, once you start down behind the pilot car, you can’t stop unless it does because doing so holds up the whole convoy. As we paraded along, I could feel Gunther’s wheels slipping and slithering through the black goop, ickity-ickity-ickity-ickity. And the smell — My God — it was tenfold what you might smell when a roof is being re-tared.
Oddly enough, the only time I really thought I might go down was when we stopped to let a dump truck go ahead of us. The road was angled down from the centre — for drainage, I suppose — and, as I put my feet down to steady the bike while stopped, I could feel my left foot slipping in the gooey pitch, which made the bike lean in that direction. Then, when I tried to bring my foot back, to prop up the bike again, I found it was stuck in the pitch. At times like this, you just learn to keep cool; and, in fact, had I panicked, I would not have had the sense to lift at the toe, first; and kind-of peel my foot up to get it loose and restabilize Gunther to vertical.
***
At Grande Cache, while refueling after the long stint on Hwy 40 (200 km of desolation; no gas; no water; no coffee; no cel coverage), a Harley chopper rolled in followed by a BMW K1200 road bike.
The K1200 was being ridden by a guy who called himself “Stretch” (an oxymoron if ever there was one). His friend, Phil, was on the Harley. The thing about Harley choppers is, the gas tanks don’t hold a lot of gas; and fill-ups are frequent — which is how Stretch happened to find himself topping off his tank alongside me while Phil refilled a tank filled only with the scent of gasoline.
Turns out the two of them were from Kansas
City; and on their way to Alaska, same as me. Stretch is somewhat of a celebrity chef and owns a restaurant in Kansas City. His bucket list includes riding in all 50 states before he turns 50. He’ll be 50 in August; and this year it’s Alaska — the final frontier. 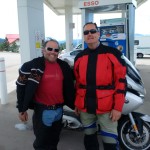 But he’s not just riding. He’s sampling the various culinary offerings he finds along the way. “We’re eating our way to Alaska,” he says. Stretch’s gastronomic adventures are being captured on video; and he’s in talks with The Food Network to get it aired.
Want to go for a ride?
Day 27 (June 27): The Beginning Of The Alcan