Thunder Bay, ON
1,770 km
Last night I stayed at the The Twilight Resort, at Montreal River Harbour on the South End of Superior Provincial Park.
It’s cold this early morning — 12 degrees; like Fall or early Spring
Dan somehow manages to be aloof and matter-of-fact at the same time through eyes that pierce through wire-framed specs resting on his nose. He listens and thinks before speaking; and, when he does, the words flow slowly and precisely through a long, grey beard and moustache.
Dan is the proprietor of the Twilight; and he’s opened the cafe / chip wagon for me so I could get a cup of joe before hitting the road this early morning. We chat about him, the North and his pig roaster as I sip the eye-opening brew.
Originally from Southern Ontario, Dan lives in Sault Ste. Marie — “It’s 3-1/2 hours to anything,” he muses — in the winter and runs The Twilight in the summer these days.
Taking another sip, I stare out at the road and confide in Dan that I am blown away by the fact that I’m still in Ontario after almost a week.
“I get that a lot,” he chuckles. “Especially from cyclists. The ones coming from the West say it took them a couple of days to cross a the prairies; and they’ve been in Ontario for days.”
I ask him about the oil-tank-pulley contraption sitting in the yard just outside the cafe.
He straightens and beams with pride. “It’s a pig roaster,” he tells me. “Made it for my daughter’s 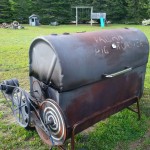 wedding from stuff we found in a junkyard. It has parts from an old washing machine… there’s part of a snow blower… handle’s from a refridgerator…” Opening my eyes a little wider (it’s still early), I take a good look and appreciate the beauty in something created from bits and pieces that were designed for something else altogether; a bit like a Salvador Dali work. In both cases, the rules of “proper” and “correct” have been thrown out the window to produce a pleasing result. This kind of thought takes courage. He has a right to be proud.

Gulping the last of the coffee from the Styrofoam cup, I shake Dan’s hand and say goodbye. Getting on my bike, I suddenly remember I didn’t pay him. I dismount and run back into the chip wagon.
“I just realized, I forgot to pay you,” I say.‎
“Don’t worry about it,” says Dan with a grin. “I forgot too.”‎
‎
Welcome to The North Country.
‎
Day 4 (June 4): Rain Suit Works!
Days 6-7 (June 6-7): Thunder Bay to Thunder Lake