Thunder Bay
2393 km‎
‎
After a long, 623 km run up to Thunder Bay and a one-day stopover to catch my breath, it’s time to hit the road again.
‎
On the way up, I stopped by the Terry Fox Memorial — just a few kilometers from where he had to stop his attempt to cross Canada. I had to really give myself a shake: Here I am whining about how long it’s taking me to cross Ontario on 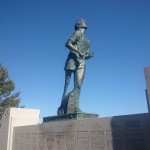 a motorcycle. Terry was crossing Canada on foot; with prosthetic leg; not for himself but to raise money for a deadly disease. It was a humbling experience; and I tip my helmet to the fellow. Truly inspiring.‎

‎
Thanks to Mathew, manager of Sportscheck in Thunder Bay. Mathew went out of his way to set me up with some decent sun glasses. My regular ones are too wide to wear with my helmet on; and, without a tinted visor, the road glare makes it hard to see sometimes. Mathew helped me find some wraparounds with polarized lenses that I wouldn’t need to take out a 2nd mortgage to own. Thanks again, Mathew and Cassandra and the others at Sportscheck.‎
‎
With a late start (11:30), rain and cool temperatures in the early teens, I expect to be in Dryden by the time I’m ready to pitch a tent–close enough to at last put the Manitoba border in sight.‎
‎
***
‎
Thunder Lake, Aaron Provincial Park, 15 km East of Dryden‎
2810 km
‎‎
Crossed into The Central Time Zone on the way here. So I’m now an hour behind those of you “Back East”. Can someone pls tell me the winning loto numbers as you hear them?
‎
Arron Prov Park is a nice change from Killarney — no black flies; and the few mosquitoes there are are slow making them very swattable. The rain stopped and the sun made an appearance just long enough to set up the tent.
‎
My campsite is on the bank of Thunder Lake. The scene is quite pastoral–like something from a Victorian era. That said, there’s no drinkable 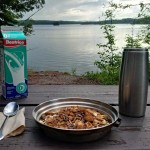 water in the park–well, I mean, the park attentandant said, according to her sheet, it should be fine if it’s boiled for five minutes. Ummm… yeah… it’s bottled water this evening.