After crossing into Manitoba, around four yesterday, it was time to find a place settle down for the night. As luck would have it, I began seeing signs for Whiteshell Provincial Park; and soon found myself on the road to the West Hawk Lake Campground in the park. One hour later, the tent was up, and I had water boiling for tea.
My campsite is just off a beach on West Hawk Lake; and the first thing I noticed was the lake was unusually round. You know, most lake shorelines jut in and out, with bays and points and such; not this one, though. It’s round. On reading a bit about the history of the area, I soon realized why: It’s a crater left by a meteorite that collided with this part of the earth 150 million years ago in the equivalent to a 20 megaton nuclear blast. Over the years, it’s filled with water from springs in the hills around it, making the water cold and clear (confirmed). It’s also the deepest lake in Manitoba at 365 feet (unconfirmed) making it a mecca for scuba divers. 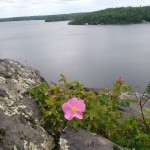 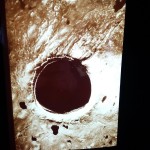 The campground is deserted except for a few RVs parked closer to the front gate (it’s still pre-season). One of these is owned by Rolly. He and his wife are here from Winnipeg. Rolly has been coming here every year since he was ten. We chat for a bit about bikes (he owns a Harley soft tail) and Manitoba and about where we’ve been and where we are going before heading our separate ways — Rolly to throw out a bag of garbage and me to my campsite to putter.
After I’ve been back at my campsite on the beach for a few minutes I hear someone approaching. It’s Rolly! He’s here to offer to take me on a tour of the trails in the hills around the campground. Am I interested? Not being one to pass up an opportunity (he’s a veteran to these parts, remember), I hastily stash the stuff I’ve been puttering with in the tent; and we’re gone. 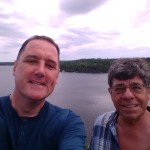 Rolly and yours truly

We climb a steep, narrow footpath through a Birch forest, stopping occasionally to catch our breath. Soon, we emerge on a rocky plateau that is not unlike the Canadian shield (in fact it is part of the shield) — granite and ancient volcanic rock and low-lying scrub. From up here you can truly appreciate the size of the crater.
Off to one side, in the water below, I can see the scuba site marked off by buoys. There is, apparently, a 100-foot drop just under the surface that divers use as a jump-off point. With the cold water and depth, it is clearly a spot for experienced divers. Rolly shows me the gravestone of one who parished.
“Three went down; two came up,” he says. “The found him ten years later.” 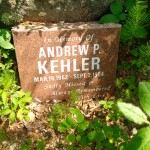 The weather is supposed to clear this afternoon; and be mainly sunny tomorrow. The timing is right; as, now that I’ve had a chance to recharge, I’m getting restless; and can hear the road calling.
‎
Next stop: “Out there, somewhere.”
‎
Day 8 (June 8): Finally out of Ontario
Day 10 (June 10): The Centre of Canada