A bit of breakfast at the West Hawk Lake Inn restaurant to a country and western soundtrack before hitting the road. Today, I’m headed for Neepawa. Not sure what the plan is after that. There’s a provincial park North of there where there’s allegedly a sea monster similar to The Loch Ness Monster.

Country and Western. Over the years, I have tried to understand this genre; but I just can’t get my head around it. Don’t get me wrong; I like Hank Williams and Jonny Cash. But,  I can only hear about yer cheatin heart an’ leavin’ with my dawg an’ the Chevy so many times. This morning it’s “Deh-oh; roll that barrel out; twist that tap and pass it around.” Ugh. Okay; maybe I’m exagerating just a bit. For those C&W lovers out there, please don’t take offense; I feel the same way about cricket too.

It’s humid today… hot… hazy… can’t wait to get out on the road and, once again, drink in the highway breeze with all its scents… freshly-cut grass, hot tar from the crack patches in the road, black sooty diesel smoke from the semi rigs… 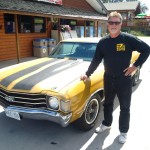 Terry is driving his 1970. Chevelle from Peterborough to Edmonton

But first, a fuel top-off at the local gas pump / corner store. It’s here that I met Terry who was doing the same thing. Terry is on his way to Edmonton from just East of Peterborough, driving a 1970 Chevy Chevelle. Gas statations are few and far between in these parts; and he rolled into this one on fumes. He’s filling up the car as well as a jerry can, just in case. Wise idea–I’m carrying two, 1-L cannisters of spare fuel in my side cases. Terry recently sold the Chevelle to a buyer in Edmonton; and is driving it there. I tell him how I used to go cruising with my uncle, who owned blue one, when I was a kid. Then he’s off; and soon, so am I.

Crossed over the longitudinal centre of Canada on my way from West Hawk Lake to Neepawa. It’s amazing what a change I experienced when I crossed over this line. To see what I mean, click here. 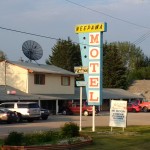 Today’s stop is Neepawa. I’ll be staying in the Neepawa motel: 65 bucks a night and all that goes with it: 2-1/2 x 2-1/2 shower stall; furniture nailed to the floor; and a notice itemizing the room’s contents and the penalty for stealing anything. But, I’m tired and it’s a room for the night. Then, Mr. Lee, the proprietor is one of the friendliest and most-hospitipal guys your likely to meet on the road (that’s where the motel is — on the side of the Trans Canada on the edge of town); and so are the guests I met.

Charlie and Wilma, for example, who have come to Neepawa from Regina to shop for a new motorhome (they love to travel): Charlie heard me pull in on Gunther, and is eager to swap stories about bikes and biking. Older and retired now, he’s been riding since he was in his teens as well; and tells me about the time he took off on his father’s BMW without permission as a kid. Charlie rides a Vespa these days; and in his Hungarian accent explains, “I can’t swing my leg over a motorcycle to get on.”

Charlie emmigrated to Canada from Hungary in ’57 to start a new life as so many did (and continue to do). His background was in starting up and engineering farming facilities–setting up farms with everything they would need to be successful. So, they come to Canada. He doesn’t speak a word of English. Then, the farming here is very different from Hungary — different soil; different crops (it’s mainly wheat over here); differnt political structure (in Hungary, the government supplied the infrastructure; over here, it was the farmer). Like so many did, he overcame these challenges. Overcoming challenges. This keeps coming up as I speak to people as a travel West. No wonder. This is a tough part of the world to live in. All the moreso if you’ve had to uproot yourself from another part of the world and adapt to it. I think Canadians are generally a pretty-hardy bunch. We just don’t toot our horns about it.