After checking out from The Neepawa Motel and a fuel and air (tires) top up for Gunther, I headed to Neepawa’s main drag. I wanted to 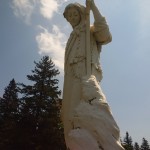 visit the home where Margaret Laurence lived from age 9-18, and see The Stone Angel live, so to speak, that was the focus of her classic novel of the same name. I also needed to find a library with a PC I could use to upload some photos.

By the time, I got to the heart of town, it was after 11; and the sun was beating down something fierce, making the inside of my riding jacket into a sauna. I had to find a place to ditch my jacket for a few hours while I walked around town. I also needed to find out where the library was.

Now, it just so happened that the parking spot I had found was just outside the offices of The Neepawa Press Newspaper. Who would know better where the library was than someone in there? So, I traipsed up the steps to the Admin offices; and whom should I find but noneother than Chase Ruttig, the editor (I recognized him from his photo in the copy of The Press I had been reading the night before). Chase was more than happy to direct me to the libray. Furthermore, he was fine with me leaving my jacket there while I went about my business in town. Then — get this — he asks me if I’d have time for an interview for his paper after I’m through at the library. What’s that about good luck coming in threes?

So, after returning from the library, Chase and I chatted about Gunther and me and the prep for this trip and Neepawa. The article should be in print in a couple of weeks. Stay tuned.

Maraget Laurence’s home was interesting; and provided insight into the person behind the words. The walk to the graveyard where The Stone Angel resided was exhausting (glad I had left my jacket at The Press) but worth it — see the photo above.

Feeling a bit parched on the way back downtown, I stopped off at The Brews Brothers 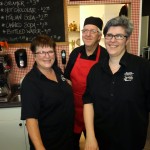 Bistro — a family-run restaurant that specializes in, well bistro food: specialty soups and salads and, of particular interest to me at the time, iced coffee. I must admit I was feeling a bit as if I’d gone down the rabbit hole, for it was odd sitting in a trendy place (old, Victorian building converted into a cafe) in the middle of a small town in Manitoba. The coffee soup and a special request fruit salad concocted on-the-fly were just what what was needed before hitting the hot tarmac again. If you ever find yourself in Neepawa, do yourself a favour and stop by The Brews Brothers.

Back at The Press, I thanked Chase for babysitting my jacket; and prepared for the next part of my journey. Before leaving, I asked him to sum up Neepawa in one word.

“Welcoming,” he said. See, Chase moved to Neepawa last October; and was living in one of several apartments over a store on the main street. Then tragedy occurred: There was a fire and the store burnt to the ground consuming with it the aprtments over top. Chase lost everything. Shortly afterward the people of Neepawa got together and raised $20,000 — a lot of money given the size of the community — to help Chase  and the other tenants get back on their feet. I don’t hear stories like this much these days; and I have to wonder whether it’s a community thing or a “West” thing or a Manitoba thing or a Neepawa thing or…

Next was a 264 ride North to The Crane Narrows at the South end of Lake Winnipegosis to search for the mythical serpent they call Manipogo.

After setting up camp in Manipogo Provincial Park and consuming a bison burger (tastes like chicken) by the beach, I began scanning thee horizon for the creature which, they say, rarely makes an appearance; and, when it does, does so in the later afternoon, when the sun is not as high. 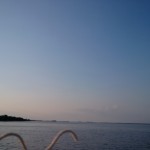 Friends, I tell you this: I walked up and down that beach for one-and-a-half hours with nary a sighting. Then I remembered the Manipogo Call I’d packed; blew into it; and The Manipogo appeared-sse the photo.