Having fulfulled the quest to find Manipogo, it was back down South to pick up the Trans Canada where I’d left it.

But first, a splash-and-dash (fuel and coffee) in Rorkton, about 25 km from the park. I had used most of my fuel on the way to the park, yesterday — pretty remote location (as one would expect for a sea monster’s habitat); no gas stations. Rorkton was, I was told, the closest; and I was able to make it there before Gunther switched to reserve. I’m carrying two, 1-L cannisters of fuel 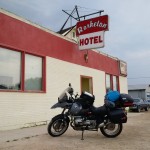 Good coffee at the Rorkton Hotel. On leaving, I met two local patrons, Terry & Paul, who were curious about Gunther. One

thing they asked me was why I hadn’t chosen a Harley, which seems to be the motorcycle of choice in these parts. I get this one a lot. I have nothing against Harleys; and one of them might have been my choice if the BMW R1150GS had never been invented. That’s the cliché, isn’t it–riding a Harley across the continent. 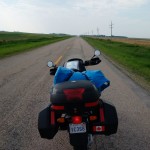 Back on Hwy 276, it’s as predicted by they guy at the BMW dealership back in Toronto: “A whole lot of nothing.” Yep. A whole lot of straight, flat, beautiful nothing; full of beautiful people. For those of you in Trinidad, imagine The Valencia Stretch. Now imagine The Stetch for hundreds of kilometers. Anyone need to clean their carbs?

Back on The Trans Canada, now; and I can see some seriously dark clouds right about where I’m headed. Time for a stop at McDonalds to get some lunch and use the wi-fi to upload some photos until the storm passes.

As I am locking my helmet to the bike, a black SUV that’s just come from the drive-thru slows and rolls down the passenger window. Another curious person. I’m beginning to like this. This time it’s Jim. Jim is from the Barrie areaJim has ridden his Harley all over the continent; and asks me where I’m headed. When he hears I’m headed for the Alaska Highway, and I’m going to change to knobby tires in Kelowna, he comments, “You know The Alaska Highway is paved, now, right?” D’oh! Now what am I going to do for adventure?

Turns out Jim is in law inforcement; and is working in the area. That kind-of fits–the short hair; the dark sun glasses. Interestingly, I judged him as a decent sort (still do) before knowing he was The Law. I wonder, if I had seen him in a marked car/bike if I would have felt the same way. I think it’s easy to misjudge people enforcing the law just as it’s easy to misjudge a “biker”; we form ideas of what people fitting a known pattern are “like” based on our past experiences. Jim was actually a really nice guy; human just like the rest of us; and doing his job. To be sure there are bad asses out there — bad-ass officers; bad-ass bikers; bad-ass investment advisors… — just as there are good people. It’s not what they do or ride that makes them good or bad; they were probably that way to begin with. Ride safely, Jim.

Leaving, the storm had, for the most part, passed; but the sky was still dark and ominous. What’s more, the wind had picked up. Big time. As I left the shelter of the buildings and trees in town, and hit the open plain, a gust of wind suddenly almost knocked me off my bike — POW! Welcome to the prairies. I managed to regain control of Gunther by ducking in behind the windscreen, to lower my centre of gravity and leaning the bike 20 degrees into the wind. Even so, when the gusts hit, the bike would slide to the outside of the lane, uncomfortably close to the gravel shoulder. More disconcerting, though, was that the gusts were blowing the on-coming traffic into my lane. 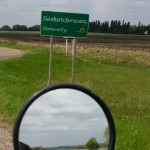 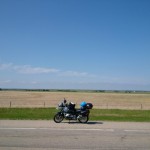 The Prairies — a whole lot of beautiful nothing 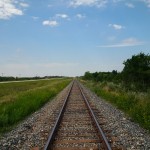 The tracks — home is somewhere back there 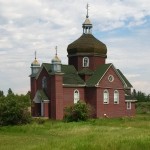 It was like this for the most of the ride to Saskatoon, my stop for today. That said, I was kind-of getting used to it toward the end: Lean; lean; swerve; lean; lean…