Saskatoon, SK
Having cooled my jets at a posh (for the price) hotel in Saskatoon for a couple of days after my 700-km odyssey from Lake Winnipegosis, I’m fresh as a  daisy and ready to push on further
West.
Given the variety of people I had the pleasure of meeting during this stopover, it was a bit like staying in The Grand Budapest Hotel.
Take Gurpreet: Met him while fuming over the 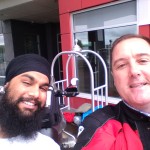 hotel’s one-and-only laundry machine which I was waiting to use and which had long since finished it’s final spin cycle. When Gurpreet showed up, he was apologetic: “I didn’t know how long these machines take.” I swallowed my grumblings; and soon we were exchanging resumes leading up to our being here. Turns out he’s from Brampton — not far from where I live. He’s working with Rogers in this part of the country verifying some infrastructure changes that Rogers has contracted out. He’s sort of doing what I’m doing — moving from place to place around this part of the country; albeit he’s working and doing it on someone else’s dime. We agreed to re-connect over coffee when we get back home.

Then, there was John: Up here for a friend’s 52nd wedding anniversary in Foam Lake, a bit East of here. I’m surprised I remembered that since I met John shortly after arriving — exhausted and lubricated with a double Jonny Walker Black — as I was unloading my bike. It was during the unloading that John, standing out front of the hotel, began asking me about Gunther. Not being one to resist a captive audience, I stopped what I was doing and began pointing out some of the cool features that make Gunther such a joy to ride. John was enthralled; and the more I talked, the more questions he had; …and the more I talked. We went on like this for half an hour; and I still had not unloaded my stuff from the bike. John’s story: He loves the prairies and loves hunting — both of which he comes up here once a year from his home in Minnesota to do with friends. His interest in my trip and my bike? Well, he’s been dreaming of doing a similar ride for years; and now he’s getting close to taking the plunge. John, if you’re reading this, DON’T WAIT! In heaven, ain’t no beer; gotta drink it here.
Ash: He was working the bar and the front desk when I arrived. I thought he was the bar tender, at first. I have to hand it to the guy — he was constantly working the floor, making sure everyone’s problems got resolved whether a dusty, smelly, exhausted biker with what was apparently an invalid reservation # or a family not satisfied with the pool facilities (they were exceptional in my opinion). I asked Sam, the hotel owner, about this later. He told me, “Cross training is important. This way, when they are not busy, they can help out somewhere else.”
Then there was Sherman. 79 years old, up from Palm Springs for some fishing with friends in Northern Saskatchewan. Sharp as a tack, Sherman was. We talked about the current state of the manufacturing industry in the US. He speaks from experience: Sherman built an $84-million plastics molding business from scratch before walking away from it to retire. He’s concerned about the manufacturing industry in the U.S. because there’s a lack of skilled, maintenance labour to sustain it. I have heard (read, actually — Shop Class As Soulcraft by Mathew B. Crawford) this as well. We have universities grinding out dentists and accountants — which is fine — but who’s training the next geration of skilled labour? Not the school system; most don’t have shop class anymore. And apprenticing is becoming less and less of an option as the people with the experience have retired or are dead. Sherman wonders about the future of his (ex) company: He says it’s being run by people with business degrees; they lack staff with the experience to maintain the equipment and facilities; and they’re wondering why they aren’t as profitable as planned. I tell him about the “dinosaurs” (what few remain) in the IT industry that are making a killing as consultants — MVS gurus and the like that have experience with mainframe computers.
Finally, there’s Roxy who’s working behind the bar (now a “bistro” as it’s early in the day when I write this): She’s from The Philippines. She’s wearing large, false eye lashes; and is constantly smiling. I’m curious about the smile. It seems a bit out of place because I can see she’s having a tough day. She asks the usual questions — where I’m from; where I’m headed; my impressions of this part of the country. I tell her I am surprised (pleasantly) by how multi-cultural the prairies are. I was expecting them to be white. In particular, I tell her, there are a lot of Filipinos out here.
Through her smile, she asks me, “So what do you think of people from the Philippines?”
“You all have beautiful smiles,” I tell her.
“We are always smiling,” she says. “Today is not such a good day. I have a lot of work to do. But I keep smiling.”
I think I understand a bit better now why the people of The Philippines never seem to age.
Next stop: Maidstone, AB
Day 12 (June 12): Race Across the Prairies
Day 14 (June 14): Maidstone