Well, I’m here. I’m here? I’m here! Goddamn–I made it! The end of The Alaska Highway. Well, the unofficial end, anyway. The official end is Delta Junction, which I passed through about 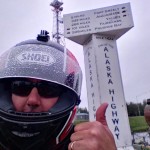 150 km ago. That’s where the mile marker is. Of course, I had to go to the end, official or not, lest there be any doubt as to whether I have, in fact, ridden The Alaska Highway from one end to the other.

The skies have not parted (except to release buckets of rain); there has been no epiphany; no Holy Grail; no life-altering visions; no… uh… anything, really. I mean, except for the comfort and bragging rights from the knowledge I have ridden across Canada and up to Alaska. In fairness, the dream I had so many years ago did not promise anything beyond riding a motorcycle to Alaska.
Hmmmm. So now what? Guess I’ll ride back home.
“…and you may ask yourself, ‘Well, how did I get here?'”
Ah, but it never was about the destination, was it? It’s about the journey; the ride. And what a ride it has been. I have had an opportunity to see parts of Canada I have only heard about or seen pictures of; and parts I did not know existed. Moreover, I have had a chance to meet and speak with the people who live there as well as others who, like me, are discovering.
How long has it been since Calgary? Seems like an eternity ago. I’ll try to retrace my steps in the next few posts.
A Ride Through The Mountains
Day 45 (July 15): Blowing Through Marlboro Country