Back in Calgary for a pit stop at Blackfoot: Gunther’s brake light has developed a tendency to remain lit, even when the brakes are off, when it’s raining. I first noticed it during the torrential downpour when I was riding from Tok to Fairbanks. The weather has been mostly dry since then; but that’s showing signs of changing. A motorcycle is invisible enough in the rain; I don’t need the added risk of being rear-ended because the driver behind me couldn’t tell I was stopping.‎
‎
Besides, I want have the oil changed one last time before heading back to Toronto.
‎
On the ride from Fernie to Calgary, I bade farewell to The Rockies, taking the Crowsnest Pass across. This is where the twisting road of Highway 3 East gives way to Highway 22 North for those that are headed toward Calgary. The curves become wider and longer as the road winds through Marlboro country: Acres of rolling green pastures with hay neatly rolled and sorted into lines on one side of the road; and cattle being hearded by cowboys on horses on the other. No kidding — they had cowboy hats and ropes with lassos; Marlboro country.‎
‎
Pastoral as it is, the wind is gusty along here. When you have these massive mountains and then the open plain, this is bound to happen as the hot/cold air trade places. In fact, these gusts make the Crownest pass one of the more dangerous roads to ride (or drive) on; and there are large warning signs along with LED signs that report the current wind speed. When I came through, the wind was blowing at 36 km/h; and, with my previous experience riding across the open prairies, the ride through the pass was like skiing on a bunny hill.
‎ 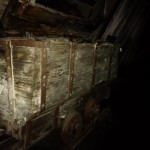 Coal car in The Bellevue Mine

Earlier, in the day, I ventured down into the Bellevue Coal Mine — one of the last of the underground coal mines in the area to be closed. The mine was in operation from 1901 to 1961. Next time you think your job is tough, consider this: The miners had 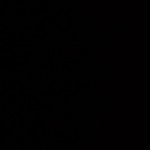 Inside the mine with the lights out: Black as, uh, coal.

to walk/climb for up to two hours to get to the coal vein the were mining; they didn’t get paid for this time — they got paid for the amount of coal they were able to mine (50 cents per ton); and to mine the coal, they had to hold 30-lb pneumatic picks (like small jack hammers) at a 37-degree angle, often over their heads for 8h per day in dimly-lit caverns (Note to self: Don’t piss off a miner). 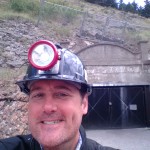 Happy I’m not a miner.