Earlier today, on my way through North Dakota, I stopped for a photo op at the geograph 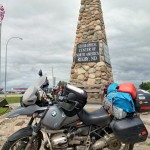 Posing at the centre of North America

ical centre of North America. No video this time, I’m afraid; it was windy/rainy/cold — not the best conditions for video. Gunther was in a good mood, though; and was more than ready for photo in front of the marker.

While there, I couldn’t help but notice I was feeling a little peckish; and decided to try out the Mexican restaurant across the parking lot from the marker: The Rancho Grande. I mean, come on; an authentic Mexican restaurant at a crossroads in the Mid-West? How could I not?

Homemade salsa and tortilla chips, a BIG burrito and a Mexican cola. That’s all I’m going to say. Well, that, and that it was a delicious change from diner burgers. I asked Aaron, who was slinging food and otherwise making patrons feel good, what on earth made them think they could turn a profit selling Mexican food o 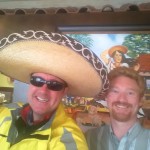 Haming it up with Aaron

ut in the middle of nowhere (yeah, yeah, it’s the middle of somewhere ’cause it’s the middle of North America): “Truckers,” he told me. The owners were already turning a healthy profit selling Mexican food to truckers with their locations in Kansas. One day, someone suggested there are a lot of hungry truckers looking for something other than typical diner food up this way. A lightbulb exploded; and eight months ago, they opened this place.

So, how’s business? Aaron says they weren’t planning to turn a profit for a couple years; but, they are doing well now. “The one challenge is finding good people [to work in the restaurant].” If anyone out there is looking for gig in a cool Mexican restaurant, reach out to Aaron at, well, at The Centre of North America, corner of Hwys 2 and 3. North Dakota.

Before North Dakota, I was in Montana as I 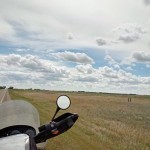 began making my way back East through the U.S. I have to say, the people I met here are among the friendliest people one could ever know.

On Thursday night, for example, I detoured off the highway around 6 p.m. looking for a place to get some dinner; and found myself in the village of Joplin (population 200, I heard). I say, village; but there’s really not much there except a few farms and houses and a shop or two that repairs farm machinery. There was, however, the local watering hole with neon “Bar and Grill” sign in the window. The “Grill” part caught my eye; and I pulled into the unpaved parking lot among the pick-ups.

You need to know I was wearing my bright, yellow rain suit as the weather had been cold and wet throughout the afternoon.

So, I ventured up to the heavy wooden door, and opened it. As I entered, the chatter I had heard from outside stopped. You could hear a pin drop as the locals looked at me. I could feel all the eyes on me as I walked over to the bar, my boots making a clunk-clunk-clunk sound on the floor. I’m not making this up — It was just like in one of those old westerns. The woman behind the bar even said “Whaddlya have.” She didn’t say “Paht-nah” though.

“Whiskey, straight up, bahkeep” I didn’t say. Rather, I knew the bright yellow rain suit was standing out just a bit; and grinned and said, “I’ll bet you don’t get people coming into your bar dressed like this every day!” After that, they started chattering away again. One of them said, “When you came through the door, we thought you were from Mars!”

And that’s how I got to know a few of the good people of Joplin. The woman behind the bar turned out to be tough on the outside (I wouldn’t want to misbehave in her place) but there was a kind heart that shone through. Plus, she made the best fried chicken I’ve eaten in a long time.

The guy sitting next to me at the bar was drinking his latest Kokanee; and introduced himself as Mike. Mike was a bear of a man; a farmer who spiced sentences with “Goddamn.” Mike told me about how he learned to ride motorcycles by learning on dirt bikes, one of which was a 3-cylinder Yamaha he had a bad fall with: “…that sonbitch taught me a lesson THAT day…”

Mike told me who the others were — his cousin who was building a wedding cake for his daughter’s up-coming wedding; and other friends and relatives. Another man, named Oslo, came in to the bar and joined in the banter; and began talking to me about my trip as if we’d known each other all of our lives.

Here’s the thing: I was there for less than an hour. And, in tha short span of time, these people took me in — a complete stranger from the highway — and made me feel as if I belonged with them; with their community.

So, a BIG thanks to the folks I met on Thursday. This one’s for you (it’s Janis Joplin; get it?)

Day 45 (July 15): Blowing Through Marlboro Country
Rattling Along The Alcan