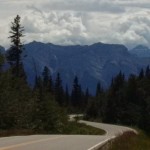 There be Rockies ahead!

After Calgary, I courted Banff for, like, a day. Couldn’t stand it. Sorry; just not my cup of tea. It’s like… like Disney World without the service quality. Exhausted parents pulling bawling, over-stimulated toddlers amidst line-ups for mediocre restaurants. Or the cinema — who goes to see a movie in the middle of one of the most beautiful mountain ranges on the planet for crying out loud? And that was still low season–I’m told there is no room on the sidewalks after Juky 1. Honestly, I couldn’t get out of there fast enough.

My saving grace was that I was camping at Tunnel Mountain, about 5K out of the actual 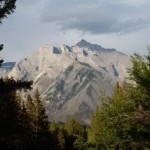 Banff: View of The Rockies from near my campsite

village. Relatively quiet among clumps of enormous Cedars, with vistas of monstrous hoodoos. It was colder than a ticket taker’s s 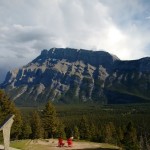 mile at the Ivar theatre on a Saturday night (Tom Waits), though. Two degrees when I exited my tent at 7 a.m.

On the way out of town, I stopped by Bankhead. Bankhead is a ghost town — not in the Scooby Doo sense or anything; just ruins of a former village that’s been overgrown 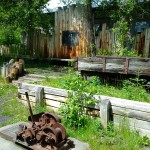 Bankhead: Once a boom-town; now a ghost-town

by forest; you would never know it’s there if you didn’t ask (which you wouldn’t if you didn’t know it was there). The town arose in 1903 from the CPR’s need for coal to power its steam engines. Its sole purpose was to mine coal — which it did quite successfully, creating a boom. In just a few years the mine’s production could not keep up with demand.

This was short-lived, however: around 1920 wages were sky-rocketing; and technology was changing such that alternatives to coal were coming on line. There were several strikes; and then, one morning in June in 1922, the gates were locked and the mine was shut down for good. It’s estimated that the town population was around 1,000; and 400-600 people were employed by the mine. 40-60 percent of the population out of work; poof.
The town was abandoned; however, the structures still remain; and as you walk along the coal-gravel path that leads through the town, you can still see the foundations of the blacksmith’s shop, the lamp house, and the original coal cars (with coal still in them). OK, that has Scooby Doo written all over it.
Day 19 (June 19): Gunther goes to the spa
Day 29 (June 29): A Day In The Dirt