‎While I was in Calgary, I had an opportunity to attend Blackfoot Motosports’ one-day, Enduro Training Course. To recap, this was training I had wanted to take in Toronto, before I left, as I expect to be taking Gunther off road (whether I want to or not) in Northern BC, Yukon and Alaska; and the thought of handling his heft and might was daunting to say the least.
So, at 8:30 a.m. on June 22, Gunther and I found ourselves at a dirt bike racetrack in the middle of Calgary, along with six others keen to learn the basic voodoo for taking our bikes off road.
The course instructor is Tobi Langer (remember Tobi?). Toby is no stranger to BMW bikes: He’s raced them for the BMW Team in Dubai; and recently obtained his training certification in Germany from BMW; and he knows GSs (like mine). Toby’s assistant for today is Blaire Cabelguen, also from Blackfoot Motosports; and with extensive off-roading experience. Rozzie Lee, head of Blacfoot’s Marketing team is capturing everything on camera and managing the hospitality tent — the latter being a vital role because it’s hot and sunny today; and staying hydrated is key.
Before we begin, the bikes’ most-breakable extremities (wind screen, mirrors, etc.) are removed; and tire pressures are dropped to 26 psi (my normal pressure is 36 in front and 42 at the back) to create more surface area for the tires to grip whatever terrain they happen to be on.
The first lessons are pretty basic — how to pick up the bike; put it on the centre stand; finding the bike’s centre of balance; etc. Then, it’s onto the dirt / mulch / gravel / sand / mud terrain where things get progressively more complex — riding with both feet on one side of the bike; 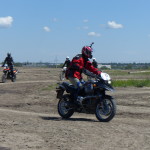 kneeling on the seat while riding — stuff I would never try at home (and don’t recommend you try at home either).

The trick to pretty-much everything off-road is to stand up on the bike. Doing so lowers your centre of gravity because your weight is on the foot pegs, closer to the ground via your feet instead of up on the seat via your butt. Then 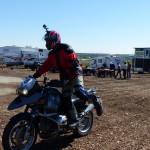 That’s it — I’m joining the circus.

n, when you put your hands on the handlebars, you form a sort-of pyramid — very sturdy. To steer the bike, you use your knees, by gripping the fuel tank and leaning the bike where you want it to go, with your arms and hands guiding the front wheel.

Once the balance fundamentals are down, it’s time to apply them; and we’re off to the dirt 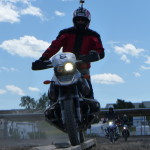 track, up-and-down dirt hills; slow turns around corners; over simulated road ruts; through tight serpentines; up steeper hills (and down the other side — not as easy as it sounds with the back wheel of the 275-kg bike skidding on loose dirt). 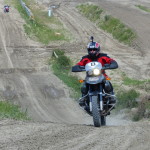 The day was exhausting — like army boot camp; but with breaks for Gatorade and amazing pizza for lunch. Pretty much every time I came in I was drenched.

Was it worth it? Absolutely. As I write this (June 29) I am on The Alaska Highway (well, off the highway and off my bike). So far, I have had to take Gunther through kilometers of the highway that are under construction, where the surface is sand, mud and gravel; I have had to take him over steel bridges that wrench both wheel back and forth; I have taken him through fresh, slippery pitch that has just been put down on the road (and yet they allow us to drive on it???). Because I had taken Blackfoot’s Enduro course, I was prepared every time — it was pretty-much what I had already done a few days earlier. I would recommend a course like this to anyone planning their first adventure ride.
Did I fall? But, of course! Nothing serious (glad we took the mirrors off); and, with my newly acquired skills for picking up the bike, I got it back upright every time. Have a look for yourself.‎
‎
This is one of the bigger hills we practiced on toward the end of the day (and this is the bunny hill!).‎
‎
Day 23 (June 23): Banff
Day 24 (June 24): Jasper