After a late start to the day (left Banff at 1:30) that was made later by a wrong turn I took at Lake Louise, I found myself on the Icefields Parkway headed for Jasper.
The wrong turn at Lake Louise is common: As I sipped a coffee at the visitors’ centre in Golden, BC — which is where I ended up — one of the staff asked me where I was coming from. As I told her I’d made the wrong turn at Lake Louise; and would now have to go all the way back to get onto the parkway, she presented me with. A guest book; and, grinning,  asked me to sign it. Seems this is a tradition at the Golden Visitor’ Centre — they get so many travellers who make the same mistake (poor sinage at Lake Louise apparently) that the collect the names.
Once I finally got onto The Icefields Parkway things began to roll a bit more smoothly (figuratively-speaking; the road was actually quite bumpy). The weather was overcast with occasional fog. I mention this because, when I stopped to take in the icefields (let’s be honest; their glaciers), there was an eery feel to the whole place–like being on another planet. Weird.
And Jasper? It’s Banff, only to a lesser degree. Tolerable; and I spent a day there to catch my breath (and give my throttle hand a rest; I can’t use my thumb for things like holding a pen or fork or squeezing toothpaste; if you’re feeling empathetic, try wringing a washcloth for six hours) before pushing further North. ‎
Beneath the glitz and glamour that comes with being a base for what I hear are some of the best ski hills in the world, Jasper is a railroad town. Boxcars are constantly shunting against a rumbling sounscape of idling locomotives 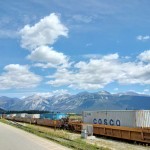 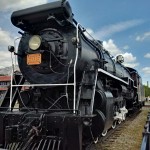 Symbol of another era in Jasper 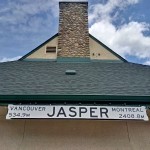 Montreal is WHICH way?

interrupted only by an occasional chuuussshhhh of air being expelled from pneumatic brakes. Jasper is a major stopping point along the main freight line across Canada — which, by the way is booming because it’s cheaper to ship goods from Euope to South East Asia by cutting across Canada rather than sailing down through the Panama Canal.

The people seem more down to earth as well. Take Dennis, for example. I’ve rented his basement studio for my couple of nights here. Dennis is originally from Oakville, just outside Toronto. He’s a self-described ski bum; and came here for the skiing. A carpenter by trade, his lifestyle is low-key; kind-of zen. He built the house I’m staying in. His current contract is making and installing towel racks in the rooms of one of the local lodges. He could probably be doing better; but he seems to have found the balance that many are searching for. “The pusuit of money is stressful,” he says.
Day 29 (June 29): A Day In The Dirt
Want to go for a ride?