Spending last night at Toad River was one of the better judgment calls I have made: There was, indeed, loose gravel on the switchbacks; and stone sheep (albeit on the cliffs); and I was alert and prepared.
I took a brief rest at Muncho Lake; and was gob-smacked at the beauty of the hills reflecting on the glass-like water — which was broken only by a sole kayak silently ripling through. Could it get much better? 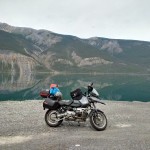 …but first, are you experienced? 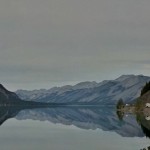 …or have you ever been experienced?

It could; for my next stop was The Liard River Hot Springs. 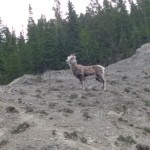 Now, those who know me well know about my penchant for long baths. Back in the day (way, way back), there was nothing more befitting of a Sunday evening than a long soak in a steaming tub with a snifter of cognac floating in the water to keep it warm, a Cohiba and a newspaper or latest issue of some motorcycle publication while Joe Jackson’s “Jump and Jive” played in the background. Aye, dem were th’ days…
Fast forward 27 (or so) years; and I find myself at the Liard River Hot Springs. There is a provincial park here, which is where I will be spending the night. But not before a trek through the forest to the first of three hot springs — this one being the only one with a deck and change rooms around it. 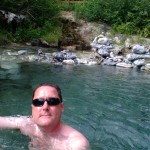 It’s worth mentioning that they have really gone overboard with the facility: the hot spring has been left in its natural state, save for stone benches that have been installed under the water and pool-like steps/railing leading from the deck down into the water. The decking follows one side of the spring; and is made of thick cedar planking with a pool-like ledge on which to sit and dangle one’s feet in the water.
What did it feel like to be in the hot spring? It felt like this. Never mind the lyrics (this is Donovan; and it was the 60s); but, listen to those dulcet,  tones from the hurdy-gurdy and sitar… mmmm… yeah…. No, wait. Stop. Pause the music; go run a bath; get in. OK; resume. See?
Earlier in the day, I had a great chat with Matt, who is the operator for this park as well as several others in the area. Fascinating guy: From the UK; engineering background; worked with The European Space Agency; designed the New Mini airbag system during a stint with BMW; and otherwise a walking encyclopedia with knowledge of just about everything. We must have talked for a good hour or so, he sitting in his golf cart, me standing, holding lines I had been using to set up my tent at the time we initially met.
We could have easily continued like this for another hour. However, we were interrupted by one of the park staff who apologized and asked Matt, “Um, how far does your emergency medical training go?”
Matt’s eyes widened; he sat upright from where he had been leaning on the steering wheel. “Gotta go!” he called out over the sound of the cart’s tires slipping on the dirt road as he left me in a cloud of dust.
About an hour-and-a-half later, I heard a helicopter approaching. In fact, it swopped down over the campground before coming to rest in a parking lot across the highway. Seems a guy was driving South on The Alcan; had a stroke; a 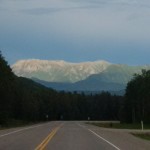 nd pulled off at the park to ask for assistance. Huh. Makes one think.