8,635 km
I think I set a new personal distance record today, riding 925 km from an early start at The Liard River Hot Springs to Kluane — not that I am proud of this; rather, I had wanted to reach Kluane (Kloo-ah-ney) today to be in a position to reach Fairbanks tomorrow, on Canada Day.
After lunch in Watson Lake, I ventured into the sign forest which is just that — a forest of posts with signs from all over the world. Started out in 1942 when one of the soldiers working on The Alcan tacked up a sign with the name of his 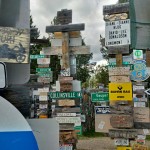 home town on it. The idea caught on; and with a military and a civilian airport nearby, people began bringing signs from all over the world. Today, there are allegedly 75,000. I only counted 74,659 though.

A little further on, while stopping in Teslin to rehydrate both Gunther and myself, I met Mallory and her dog Baylor, from Oregon, who had also stopped for a rest. Mallory has fitted a side car to her KLR 650; and that’s where Baylor sits, complete with sky-blue goggles.
Remember how I said people help each other out on The Alcan? Well, get this: Mallory and Baylor were happily cruising along the highway when the KLR began to cough and splutter. Something was seriously amiss; and she pulled onto the shoulder. Now, motorcycle engines have a big bolt in the bottom of the engine case which you loosen and remove to drain the oil when doing an oil change. This bolt on Mallory’s bike was gone. So was all the oil. At that point, you start to think about throwing in the towel because, with no oil and nothing to keep it in, you’re not going anywhere. 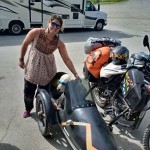 As she’s standing there trying to think what to do next, along come a few guys who are also riding KLRs. When Mallory explains her bike has no drain plug, one of the guys reaches into his pocket, produces a spare one he’s carrying, and says, “You mean like this?” Then, one of the other guys coughs up some oil. Can you believe it? I told her she should find a lotto to play as soon as possible. You can read all about Mallory’s adventures here.
As I approached Kluane, I encountered my first road challenge on The Alcan: Two, lonely, 10K stretches where the asphalt was covered with loose gravel. It was like trying to ride on marbles. Thanks to my knobbies, I was ‎able to say vertical; but I wouldn’t want to riding those stretches on smooth road tires.
So, I now find myself at Kluane; or, rather a B+B where Kluane once was. It’s definitely there as a dot on my CAA map; but that’s all it is. When I arrived at where it should be, according to the odometer, there was nothing but the same rock and scrub I’d been riding through, save for a long-since abandoned gas station.
I thought about pitching my tent off from the road for the night. Then I thought about grizzly bears; and opted to take my chances that the B+B wasn’t full. It was a 5K drive down a winding gravel road; and, after having just ridden 900K, I was determined to find a place to sleep.
I was in luck: Polly, the manager of the place did, in fact, have a couple of rooms available. The B+B was actually more of a compound with cabins and a common cookhouse that also had a few common bathrooms and showers. Polly’s 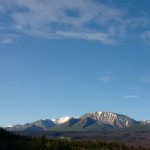 A view from B+B at Kluane

grandfather had originally established it as a summer camp for youths; and the family had turned it into a B+B some years ago.

When I asked her where village of Kluane was, she laughed. “There is no Kluane village! Maybe there was a hundred years ago; but it’s long gone.”
Interestingly, as Polly was showing me to my cabin, she pointed out a grizzly bear that was cruising the shoreline about 200 metres away.
‎
Day 29 (June 29): A Soak In The Hot Spring‎
A Ride Through The Mountains